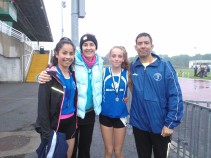 The 2016 Dublin Juvenile Track and Field Championships drew to a conclusion on Friday evening June 10th and Saturday morning June 11th. On Friday evening the scene was set yet again for more intense competition to be only cooled somewhat by the rain.

Our club has a strong tradition in middle and endurance events with this tradition coming to the fore again as our athletes competed in the 1500m across a variety of ages on the Friday evening. The standard in all 1500m races was high and all our athletes must be given credit and take pride in the way they competed on the night giving it their all, fighting hard for their club and for themselves. The following athletes managed to medal on the night; Lottie & Ruby getting a silver and bronze medal respectively and running PB’s in what was a very hotly contested girls U/15 1500m race, followed by Sive who got a bronze medal in the u/19 1500m race. All have booked their place for the upcoming nationals when they will take to the track in Tullamore. Another Skerries athlete who booked his place on the night for the nationals was Conor, finishing 4th in the U/18 1500m and running another PB following his success in the 800m the previous week.

No sooner had Friday’s night events concluded and our athletes were back early morning in Irishtown Track to compete in events over 400m & 200m. Our club may have a strong tradition in endurance, however with our new sprint programme launched this year under the careful guidance of Ailis, our sprint athletes held their own in what were very competitive races. Orla and Kerry toed the line with each of them flying out of the blocks (yes we now know how to use blocks) over 400m and 200m respectively, followed by Josh who made it out of his heat to finish 5th in his 200m final.

This brought the clubs Dublin championship campaign to an end, however the abiding memory is how all our athletes competed, giving it their all, however more importantly how they all supported each other, if they were not competing they were shouting from the side of the track providing encouragement to their team mates. Special thanks must also go to our coaches in preparing all our athletes for the championships and to parents who helped out at each days competition.