Skerries AC entered this competition for the first time with two U/9 and an U/11 boys team in the individual competition and an U/9 boys relay team in the 4 x 100m. Conor C and Conor D were the first up in their 60m and crossed the finish line in 4th and 5th respectively. Next up were Jamie and Dylan, who finished their races in 3rd and 4th respectively just as the rain started to fall. All the lads ran really well completing their 60m in less than 12 seconds against stiff opposition and in their first Dublin Championships.

The rain got progressively worse while Jake & Luke were waiting to be called for their 60m race, and trying to pass the time playing soccer in one of the Astro pitches. Finally the call came and down we headed to the start line. The downpour continued and got worse before the lads ran in heat 6. Both ran very well, Jake coming first in a time of 9.58 catching Luke just before the finish line. Luke finished his race in a time of 9.85. Fortunately it was time for Luke & Jake to head back to Skerries so Luke could get warmed up and changed before heading back into the Aviva for the Pro12 Final.

Meanwhile the U/9s were looking for cover from the torrential downpour as they had to wait for another 90 mins for their 4x100m relay. The lads had been practicing hard under the watchful eye of Michael Donoghue and were keen to show off their baton passing skills despite the weather. All the lads had terrific performances and ran their best narrowly missing out on a third place finish in their heat.

Skerries AC are very proud of all the athletes especially the U/9s who had a long morning in awful weather conditions. Hopefully they will not be discouraged from competing again. Thanks to Michael for coaching the U/9s and to Stephen, Lesley, Ailbhe and Hughie for their support and encouragement today. 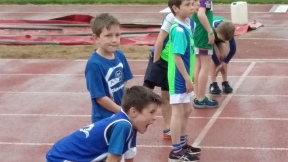